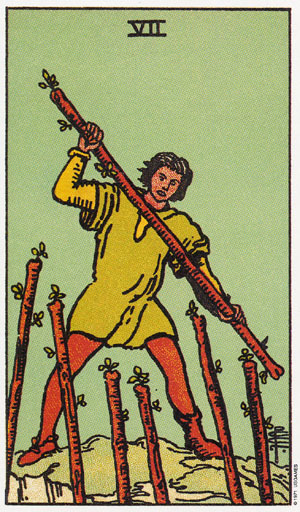 Light: Refusing to be silenced through fear or intimidation. Continuing a fight against all odds. Being fierce. Defending yourself against physical and emotional attacks. Refusing to put up with abuse. Clinging to your values despite all pressure to abandon them.

Shadow: Having a chip on your shoulder. Taking unnecessary risks as a means of proving your fearlessness. Looking for an opportunity to take offense. Responding to constructive criticism with defensiveness. Refusing to stand up for yourself and your beliefs.

Personal Growth: Standing up for yourself is healthy and reasonable. Turning the other cheek doesn’t mean making yourself into a doormat. It’s okay to insist on respect. Apply this principle to your interactions with others, too; it’s easier to get fair treatment when you’re known for treating others fairly.

Work: The workplace tends to reward aggression. Defend yourself and your own work, making sure you have hard data to back up your claims. If you must become involved in unpleasantness, be sure those you investigate have no valid reason to feel attacked.

Relationships: In a healthy relationship, each person feels secure. Partners and friends who constantly abuse others or tear people down must be confronted. Being in a relationship does not mean squelching your own unique insights; stand up for what you feel is right.

Spirituality: Especially when you feel attacked, your spirituality should guide you. Don’t be defensive; as a spiritual person, you know it’s “not about you.” As dramas unfold, stand up for your beliefs, but avoid absorbing and reflecting the poisonous emotions of others.

Fortune-Telling: Don’t be surprised by a personal attack. Prepare to defend yourself or someone you love.

Fool's Journey: The main character is attacked by the minions of his adversary.

Threatening Wands: On the 7 of Wands from RWS-inspired decks, we often see a lone figure threatened by six rather threatening Wands. Six is the number of collaboration, suggesting that many people have come together to launch an attack. It's unclear if they're coming to hurt you, or if it's founded in some other intention and masked by miscommunication.

Unstable Ground: The figure in the 7 of Wands is cornered on a hillside cliff that looks uneven and unstable. This hints at the precarious nature of the position he is trying to defend.