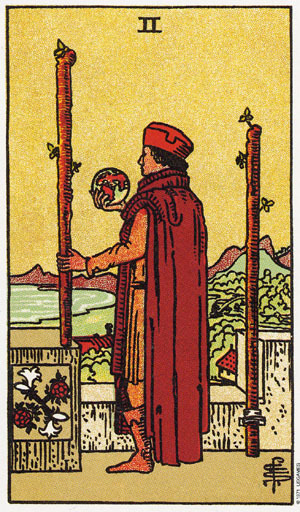 Light: Having a choice. Offering or being offered an option. Seeing the value of another person’s approach. Understanding there’s more than one way to “skin a cat.” Successfully doing more than one thing at a time. Being empowered to make a choice.

Shadow: Misrepresenting your intentions. Doing one thing while desiring another. Changing course mid-stream for no good reason. Refusing to change your goal even when pursuing it no longer makes sense. Disregarding the input of others.

Personal Growth: While others become slaves to fashion and convention, you should work to express yourself. What sets you apart? What makes you unique? These are qualities worth celebrating. Rather than give in to brow-beating and peer pressure, set your own standards in all things.

Work: No one can serve two masters. Before proceeding, determine exactly how much authority you have in this matter. In addition, it’s time to decide which “To Do” items move you closer to your personal goals…and which ones are merely consuming your limited time and energy.

Relationships: To what extent does everyone involved in your situation want the same thing? The actions people take reveal their true inclinations. To gain insight into the goals of others, study what they do. Are their actions in line with their stated goals? Are yours?

Spirituality: Others will have their opinions, but ultimately, you must decide what spiritual practices are right for you. Speak your mind and share your own views with courage and honesty. Answering the call of Spirit may dictate taking the road less traveled by.

Fortune-Telling: Beware false friends. Don’t be mealy-mouthed; say what you think and do what you want to do.

Fool's Journey: The main character is confronted with an alternative goal.

Bolted Wand: In RWS-inspired decks, one of the two Wands is bolted to the wall, hinting at the possibility that you may need to abandon old habits for new, more flexible ones.

Red Roses and White Lilies: The flowers at the foot of the Magician suggest the unification of the masculine and feminine, associated with the alchemist’s goal of spiritual refinement and perfection. On the robes of the acolytes in the Hierophant card, or as a painting on the 2 of Wands, they suggest male and female sexual energies being repressed or in conflict.

Moment of Choice: When the road divides, which way should you go? Consider both points of view, but only for a time; eventually, you must choose a course and move forward. Developing a clear picture of what matters most will help you make the right decision.

Globe: The figure in the 2 of Wands on RWS-inspired decks carries “the whole world in his hands”. He enjoys a clearly-defined value system, enabling him to make difficult choices with ease.