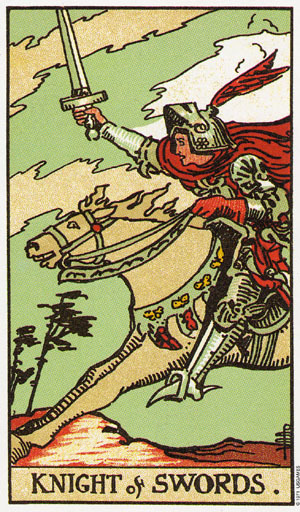 Personality: The Knight of Swords can represent anyone who wants to lead the way (Knight) to greater knowledge and mental clarity (Swords). The Knight may also represent the tendency to be more intellectual than empathetic, or a compulsive desire to analyze or lecture others.

Light: Speaking your mind. Making your opinions known. Offering constructive criticism. Sharing your knowledge. Making insightful observations. Pinpointing the problem. Clarifying what others have said. Giving clear direction to others. Uncovering the truth.

Shadow: Stating your opinions as fact. Picking fights. Starting arguments. Using clever insults to undermine the confidence of others. Tossing reason out the window. Speaking without taking the feelings of others into account. Going on a witch hunt. Distorting evidence.

Personal Growth: Rather than be defensive, relax. Give criticism a chance. A mature person acknowledges his or her capacity for improvement, and isn’t intimidated by the observations of others. Take what will help you; discard the rest.

Work: Ask good questions. Before rendering judgment, be sure you have all the facts. Refrain from cutting others short; even if you’ve heard it all before, give others a chance to share their ideas. Resist the urge to correct; open the door to free-wheeling creativity before you become an editor.

Relationships: Words can hurt. In addition to knowing why you’re saying what you’re saying, think about how you’re saying it. Don’t read too much into the statements of others. If you aren’t sure what someone means, ask for clarification. Resolve to be a better listener.

Spirituality: Consider the words that have been used to shape your understanding of yourself (and Spirit) over the years. If these terms have been poisoned by dogmatism and abusive spirituality, strive to find your own words for the higher powers and deeper realms you hope to explore.

Fortune-Telling: A blunder leads someone to say something he or she regrets. If this was you, be prepared to apologize and move on.

Fool's Journey: The main character's remarkable abilities cause some to become his enemies.

Upraised Sword: Charge! In many different decks, the Knight of Swords is rushing off on a quest, sword upraised. But what is the quest? What’s his destination? What are the terms of success? Charging ahead feels great—but before you do it, a little investigation and reflection can go a long way.