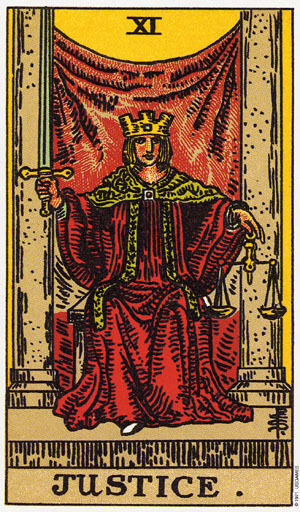 Light: Making an objective decision. Weighing an issue carefully before taking action. Appropriately scaling your reaction to a situation. Getting all the facts. Considering evidence. Deliberating.

Shadow: Delivering harsh criticism. Obsessing on rules and regulations. Playing by the book even when it is destructive or counterproductive to do so. Confusing snap decisions with timely action. Playing favorites.

Personal Growth: Everyone faces limitations of some kind. Learn your own limits. Rather than allow them to define you, use what you know to better position yourself for success. Learn when to say yes; know when to say no.

Work: Work toward a more equitable division of labor. Learn to delegate. Evaluate your own work using the same standard you bring to bear on the work of others. Know what matters most, and prioritize accordingly.

Relationships: Relationships are rarely 50/50 propositions, but the closer you come to an even division of responsibility, the better. What do you really need to be satisfied? Knowing your standards empowers you to evaluate your feelings more clearly.

Spirituality: In all things, seek balance. When faced with a decision, quiet your mind and allow your heart to weigh the moment. Trust in the law of karma; avoid personal efforts to mete out universal justice.

Fortune-Telling: A legal verdict will be rendered soon. Someone is making a decision. You need to get the facts.

Religions: Themis or Justitia. Ma’at. Solomon dividing a baby. The Sword of Damocles. The giving of the Ten Commandments.

Fool's Journey: During the main character’s initial challenge, his or her ability, knowledge, or personal suitability is found to be lacking.

Scales: Scales have long been a symbol of balance and evaluation, as seen in the Justice card. The Egyptian god Ma’at weighed souls to determine purity of heart. In the 6 of Coins, there's a man with scales doling out charity to grateful recipients. The scales emphasize the fairness with which his charity is delivered, making it possible for each person to receive exactly what’s needed. In your own circumstance, what role does fairness play?

Boaz and Jachin: The B (Boaz) and J (Jachin) often seen on the columns to either side of the Priestess are the two pillars of Solomon’s Temple. Their names mean “in strength” and “God will establish” and hint at the High Priestess's mysterious connection with reality. We also see these columns in the Justice card, but the veil now represents human law.

Blindfold (or lack thereof): Themis on the Justice card doesn't wear a blindfold, emphasizing her ability to foresee the future; Justitia does, emphasizing her objectivity. In RWS-inspired decks, we frequently see a blindfolded woman grasping two broadswords on the Two of Swords. Set apart from the waters of intuition, she is depending solely on logic to make a difficult decision.