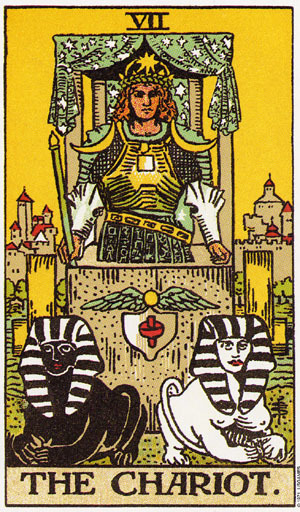 Light: Breaking through barriers. Moving forward with confidence and authority. Reaching the pinnacle of success. Basking in the glory of achievement. Guiding an effort to total victory. Establishing yourself as a worthy leader.

Shadow: Resting on laurels. Riding roughshod over the feelings or expectations of others. Focusing more on past successes than future opportunities. Failing to rein in impulsive behavior.

Personal Growth: Reaching a new plane of maturity is exciting, so some celebration is in order. Every ending, though, is a new beginning; keep an eye fixed on further growth. Having reached the limits of mundane success, it’s time to work on deeper transformation.

Work: What do you need to move forward? Now is the time to summon resources and plan for future success. Past successes might not be an indicator of current value. Remember that employers tend to ask “What have you done for me lately?” Work accordingly.

Relationships: Moving forward to mutual victory requires trust and cooperation. If you have this already, depend on it during an upcoming challenge. If you lack it, consider what choices have prevented forming this kind of bond. Don’t rest on your laurels; successful romance is an ongoing commitment.

Spirituality: Celebrate spiritual achievement, but be aware that a sense of having arrived can be the first step toward disastrous vanity. The goal is not to be a guru, but to achieve balance and stability. As you make progress, extend a helping hand to others who still await their chariot moment.

Fortune-Telling: Victory is a certainty. Move ahead with all plans. Beware the jealousy of others.

Fool's Journey: With an eye toward solving the story’s central problem, the main character commits to a quest, usually at the end of the first act.

Canopy: Stars imprinted on the canopy of the RWS Chariot signify the occupant’s mastery over all things under heaven.

Sphynx: Horses draw the Marseilles Chariot, but in other decks, sphinxes pull the chariot. Sphynxes are keepers of riddles, wisdom, and hidden knowledge. One is black and the other white, symbolizing the charioteer’s dominion over masculine and feminine forces. The Sphynx sits at the top of the Wheel of Fortune, one of four fantastic beasts that each have a turn.

Lingam Yoni Shield: The Chariot's shield has a symbol known as the Lingam Yoni. Lingam is a cylindrical or phallic shape associated with male sexual potency; the yoni, shaped like a bowl, is considered the source of all that exists. Like the colors black and white, they represent masculine and feminine energy.