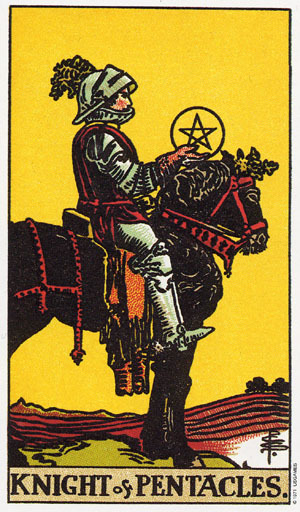 Personality: The Knight of Coins can represent anyone who wants to lead the way (Knight) to greater physical and financial success (Coins). The Knight may also represent the tendency to be more cautious than adventuresome, or a compulsive desire to avoid risk by obsessing on tiny logistical or physical details.

Shadow: Throwing caution to the four winds. Spending without regard for consequence. Spending on luxury when necessities are lacking. Escaping stress by spending money. Obsessing on tiny physical or financial details. Perpetually chasing after some new bauble. Copying another’s work and claiming it as your own.

Personal Growth: There’s a fine line between caution and pessimism. Believe in yourself and what you hope to achieve; at the same time, be sure to attend to the “doing” that leads to “having.” Encourage progress by keeping a physical reminder of upcoming rewards close at hand.

Work: Keep an eye on the bottom line. Some times call for penny-pinching. At other times, growth many depend on generosity. There’s satisfaction in delivering a final, physical product. Keep an eye on the goal. Keep your commitments. Tackle big projects one step at a time.

Relationships: Relationships, like investments, should pay dividends. Your investment of time, attention, and affection should be returned by your friends and partners. Taking care of others is admirable; take care of yourself, too. Watch for creative ways to enjoy time together without spending money.

Spirituality: Avoid taking a guru’s claims at face value. Weigh any guidance received on the scales of your heart. Take spiritual advice (including advice from this book) with great caution and deliberation. Find practical, physical, creative ways to express your spiritual insights.

Fortune-Telling: A stingy person may chide you for spending money. Be prepared to defend an economic or sexual decision.

Adoration of the Coin: The RWS Page, Knight, and Queen of Pentacles seem to romanticize the giant coin in their hands, holding it like a beloved treasure. There's something a bit silly and superficial about this level of reverence for money. As the court cards progress you can see how once you’ve attained the object of your quest, caution is increasingly required to protect, maintain, and preserve what you’ve won.

Unmoving Horse: In many decks, the Knight of Coin’s horse stands as rigid and still as a statue. There’s a difference between proceeding with caution and allowing yourself to become paralyzed by pessimism.