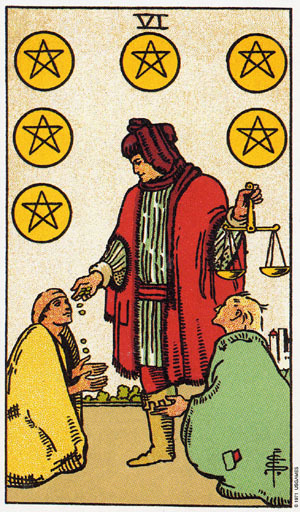 Light: Giving time, money, or effort to a charity. Taking part in a group effort. Lending your resources to others without expecting anything in return. Making sure everyone is treated equally. Working together toward a common goal. Redistributing wealth, time, or attention. Tithing. Sharing credit for your success.

Shadow: Making a loan as a means of gaining control over someone. Using charitable acts to draw attention to yourself. Dividing work or resources unfairly. Failing to do your part in a group effort. Ignoring obligations and commitments.

Personal Growth: Charity is based on a simple principle: we should all look out for each other. Self-interest comes naturally; interest in others and their well-being is the hallmark of maturity. Putting the needs of others first can ease your progress toward a balanced life.

Work: Learn to delegate. Many people, working together, can achieve more than one person, working alone. So what if some people contribute less and still get credit? Good managers will recognize star contributors and reward them accordingly.

Relationships: In a healthy relationship, partners help each other. Healthy partners agree on rules for dividing up chores, financial responsibilities, and social roles—and then honor those commitments. Define what equality means for you, and help each other achieve it.

Spirituality: A mature soul seeks to come to the aid of others. This may involve traditional charity: giving time, money, or effort. Don’t forget, though, that prayers and compassionate meditation can also change the world for good. Whatever form of service your spiritual path encourages, offer it with sincerity and regularity.

Fortune-Telling: When you need help, ask for it. Remember, though: what you receive may be limited by what you’ve given to others in the past.

Fool's Journey: The main character wins by cooperating instead of competing.

Scales: Scales have long been a symbol of balance and evaluation, as seen in the Justice card. The Egyptian god Ma’at weighed souls to determine purity of heart. In the 6 of Coins, there's a man with scales doling out charity to grateful recipients. The scales emphasize the fairness with which his charity is delivered, making it possible for each person to receive exactly what’s needed. In your own circumstance, what role does fairness play?

Charity: The wealthy merchant on many versions of this card won’t miss a gold Coin or two, but the money he distributes could make a huge difference to someone less fortunate. Sometimes there is an imbalance of values between people where giving ends up being more valuable to the recipient than it costs to the giver.