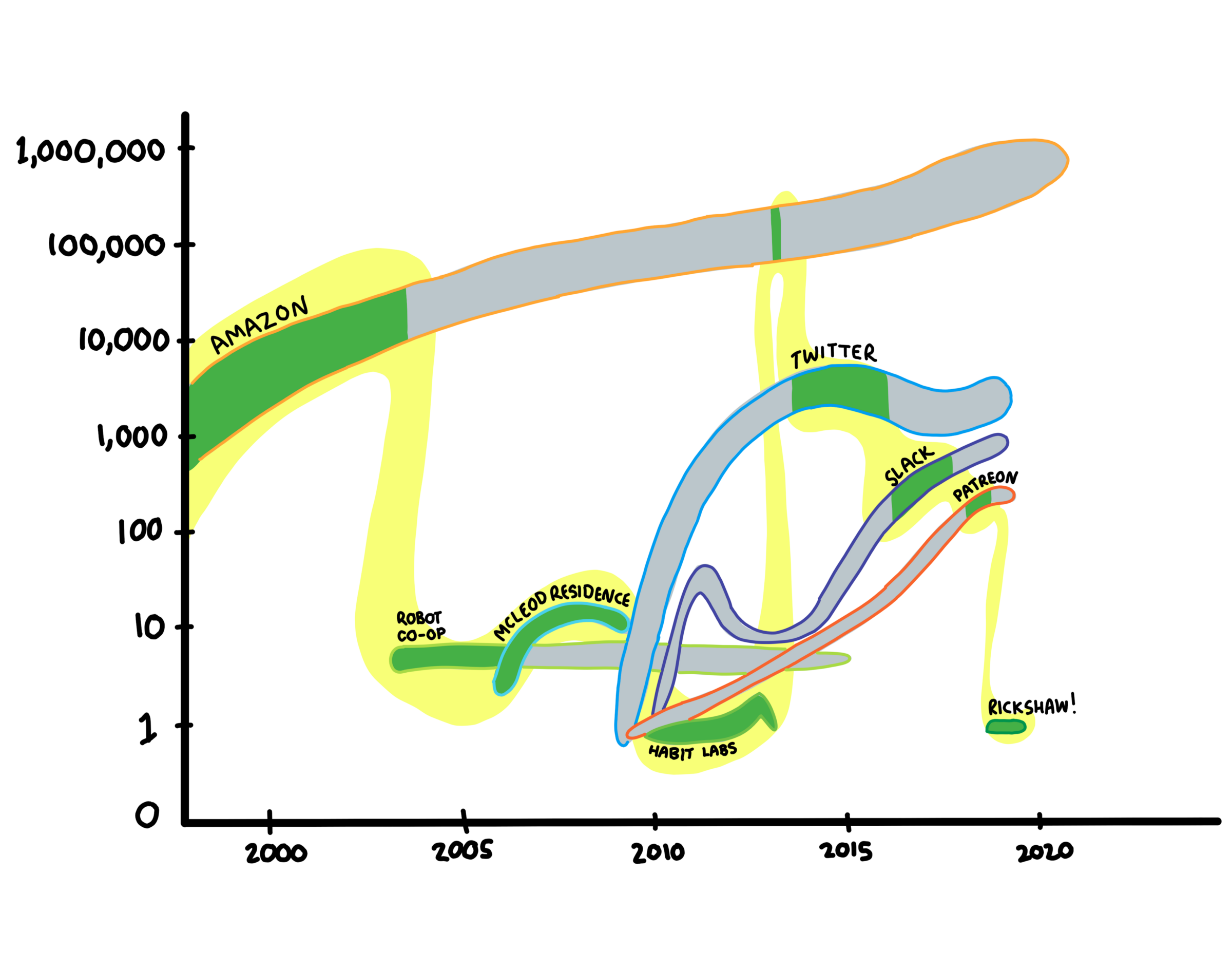 I’ve been doing a review of my life every year around my birthday since 2006. You can last year’s reflection about digging deeper, and the other 12. The primary formative event of my last year was changing careers and re-entering the world of independent creator living.

One way to see this is as a cycle I’ve now been through twice of moving from large companies to small companies. This year I oscillated back to independent creative work after 6 years at big tech companies. A brief history of my career is: I joined Amazon in 1998 and left in 2003. From 2003 to 2012 I co-founded several startups (Robot Co-op, McLeod Residence, Habit Labs). Technically Robot Co-op became part of Amazon during that time, but I left before it was re-absorbed into the mothership. From 2012 to 2019 I spent another six years at Twitter, Slack, and (briefly) Patreon.

Green is when I worked at these companies. The y-axis represents approximate number of employees at the company, on a logarithmic scale.

And here I am back on the 1-human rickshaw. Honestly, when I joined Twitter in 2012 I didn’t think I’d last more than a year or two at larger companies, but I think I underestimated how meaningful and creative the work there would be. I’m ready for another year of independent work, but at this point I see the trade-offs at both ends of the pendulum.

It’s tempting to always rationalize why our current position is optimal, but as I get older it’s a lot easier to see how things move in cycles, and the cycles themselves are what we should pay attention to more than where we happen to be in them at the moment.

Another cycle that’s present here is the cycle between tech and traditional businesses. I was a creative writing major in college, and dreamed of writing novels but then joined the tech world because it was such an exciting time. McLeod Residence was an art gallery and bar in Seattle that was my first attempt to return to the brick and mortar tangible world. That was hard so I ended up going back to tech for a while, and am now trying another route that hearkens back to my original writing aspirations.

There’s something in the air.

Monday morning I woke up without a client project for the first time in ten years. For most of my career, my goal was to build my client list. And that work paid off. Over the course of 11 years I’ve worked with over 80 clients. For most of the last decade, I loved client work. I loved the challenge of art direction, feedback and the back and forth toward something final. I loved working with art directors, who are mostly incredibly smart, hard working, kind people. I even grew to love a tight deadline. I feel so lucky that I got to work on so many incredible projects. But in the past few years I started to feel really tired and simultaneously disconnected from my own creativity. I have always made my own work amidst doing client work, so that wasn’t exactly the problem. I just wasn’t doing it with enough depth or any sense of abandon anymore because I didn’t have the time or energy. And I felt increasingly sad about that disconnect. Earlier this year I realized I needed — at least temporarily — to turn my attention back to my own process & work, not just a little, but in full force. So with the exception of some book projects, I made a choice to stop making art for other people for awhile. This was not an easy decision. Client work is a huge part of my income. The relationships I have with some of my clients feel almost like family. Much of my own sense of success has been in direct relationship to the relative demand for my work, which has luckily been high. So if I stopped doing the thing I worked so hard at building over 10 years, who would I be? I started grappling with that question earlier this year. And I realized that my happiness, my connection to my well of creativity, was more important than my identity as a busy commercial illustrator. So I finished up the assignments I had before my vacation & have stopped taking on new client projects. This summer & fall I’m working on a couple books with generous timelines. I’ll continue to run my shops, teach & speak . But I’m entering a new phase with enough space for exploration. And while I’m scared AF, I’m also ALL IN. Shaking things up feels good. ❤️

The phrase “all in” is really interesting to me, because it’s both exactly how I feel and also the opposite of how I feel. And this distinction is what fascinates me. How is it possible to go in “full force” while doing it “at least temporarily” and not trigger a paradox that destroys the universe?

This year’s motto: All in & with the flow

To be all in is to commit whole-heartedly to something. To go with the flow is to let the flow carry you where it may. To combine the two means to go all in with full force while it makes sense, and then to go all in with full force on the next thing that makes sense. And in order to do this there can’t be a lot of top-down structure in place limiting where force can be directed, or limiting where it can be redirected to. Maybe that’s creative freedom, and why it is tough to operationalize it in large structured groups like organizations, and why creative people need to exist in a loosely-connected interdependent sense with lots of people rather than participate in a rigid hierarchy optimized for efficiency and productivity at a specific task.

My tool kit for being all in & with the flow is: 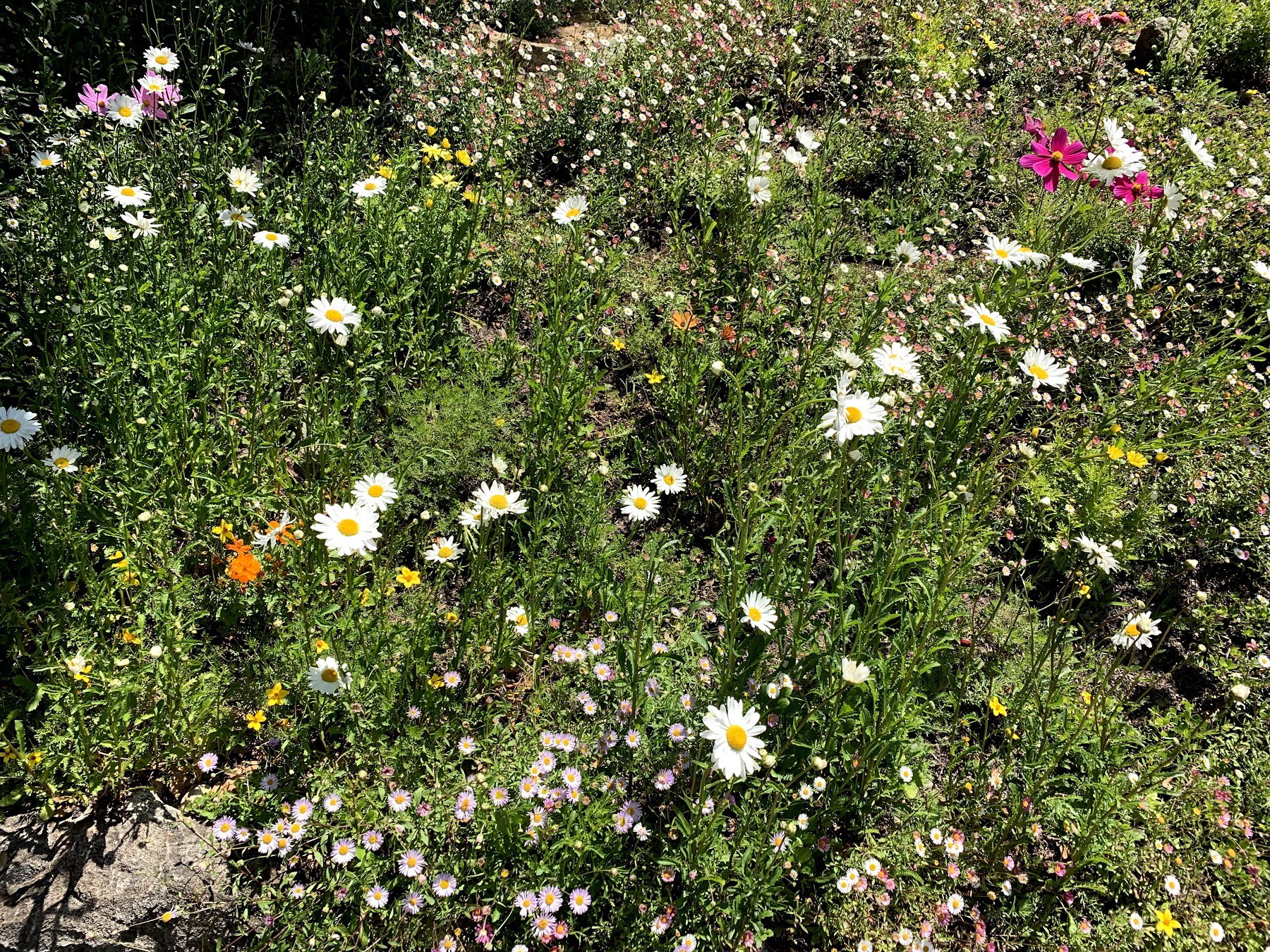